Spanning both the Garden District and Southwest City, Southwest Garden is bound by I-44 to the northeast, Missouri Botanical Gardens and Tower Grove Park to the east, Scanlan and Connecticut to the south, Hampton to the west, and Columbia, Southwest Avenue, and South Kingshighway to the northwest.

Spanning the neighborhood, Vandeventer and Southwest Avenues follow the route that was the first public road from St. Louis to Jefferson City, Old Manchester Road. An extension of Market Street, this route was the only way west without crossing the Missouri or Meramec Rivers. Until the alignment of the Missouri Pacific and Frisco Railroads, however, the area remained rural.

The area west of Kingshighway was found to have clay deposits in the late 1830s. The industry did not flourish until an ordinance banned frame construction in response to St. Louis' own "Great Fire", which destroyed fifteen city blocks in 1849. That event and the completion of the railroad in 1852 hastened development of the clay mines and brick industry.

With the railroad and nearby Russell and Christy coal and clay mines operating in the late 1800s, immigrant workers populated the area. While Italians settled in The Hill area, Germans settled between the Hill and Arsenal, forming St. Aloysius Gonzaga parish. This German community resulted in frame shotgun houses and flats built around present-day Sublette Park.

More block-wide masonry construction was built in the early part of this century. East of Kingshighway, the neighborhood occupies land originally purchased by Henry Shaw in the mid 1850s. "Shaw's Garden" (renamed Missouri Botanical Garden) was adjacent to his home. Private developers built homes surrounding the Garden in the early twentieth century, with expansive multi-family construction surrounding the extension of streetcar lines.

No pages meet the criteria 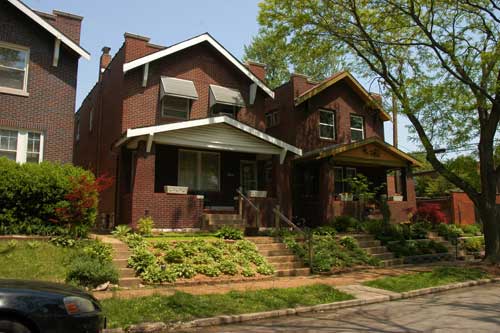