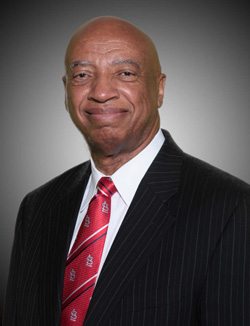 Otis Williams is the Executive Director of the St. Louis Development Corporation (SLDC). The Corporation is responsible for bringing people, jobs, and investment to the City.

Prior to joining SLDC, Otis Williams served over 28 years in the U.S. Army and retired at the rank of Colonel. Key assignment included duty as Chief of Staff of the U.S. Army Corps of Engineers (1996-1998). Since coming to St. Louis in 1998, Williams has had a leadership role in several multimillion-dollar development projects that are revitalizing the City’s downtown and neighborhoods.

Williams previously served three years on the National Board of Directors of the Society of American Military Engineers. He was honored with 2016 J.H. Poelker Levee Stone Award from the Downtown , and received the 2016 Governor’s Award for Career Service in Economic Development. He is a registered professional engineer in the District of Columbia.

Williams is a native of Covington, Georgia and is married to formerly Gwen Smith of St. Louis. They have two adult daughters.