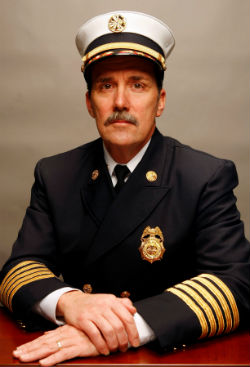 Appointed as Chief of the St. Louis Fire Department on November 19, 2007,

Chief Jenkerson has served the St. Louis Fire Department in the capacity of a firefighter, fire captain and battalion chief, and is certified and experienced in each of the department's many domains including fire suppression, emergency medical services, aircraft rescue, vehicle entrapment, collapse rescue, high angle rescue, rescue diving and hazardous materials management; including chemical, biological, explosive and radiological incidents.

An accomplished administrator, Chief Jenkerson has served as an incident commander in the city's busiest fire district for the last decade and has established and managed essential department programs such as the Bio Watch Operations for the City of St. Louis, Fair St. Louis, the Mass Casualty Response System for Lambert Field, Y2K Compliance and the department's first in-house EMT certification program. Serving as Incident Commander, Chief Jenkerson has managed numerous major city events such as the Major League Baseball World Series in 2004 and 2006, the NCAA Final Four Basketball Tournament in 2005, the Missouri Democratic National Convention in Boston, in 2004 and several full-scale exercises under the Department of Homeland Security. He has also served as a Field Commander at Lambert-St. Louis International Airport.

Chief Jenkerson earned a Bachelor of Arts degree, Summa Cum Laude, in Organizational Leadership and Development from Saint Louis University, with minors in psychology and biology. He has completed coursework at Missouri Southern State College toward a Bachelor of Science degree in biology and chemistry and holds an Associates of Science degree in Fire Engineering from Forest Park Community College. Dedicated to sharing his knowledge and passion for the fire service, Chief Jenkerson is an adjunct instructor at the National Fire Academy in Emmitsburg, , Southwestern Illinois College, the University of Missouri at Columbia and the State of Missouri Bureau of Emergency Medical Services.

Chief Jenkerson also serves as a technical advisor for a number of federal, state and local agencies including the United States Marine Corps, the Department of Homeland Security, the Federal Emergency Management Agency, the National Fire Academy, United States Representative Russ Carnahan (Homeland Security/Terrorism Intervention), the University of Missouri, Department of Public Health, offices of the City of St. Louis, as a member of the St. Louis City Local Emergency Planning Committee and as an expert in hazardous materials and incident command for mutual aid partners in the St. Louis Metropolitan area.

In a collaborative research effort, Chief Jenkerson's work has been published as "Decontamination of Non-Ambulatory Victims in a Simulated Chemical Contamination Scenario;" American Industrial Hygiene Conference; Chicago, (May 2006); and

"Specialized Issues in Health Risk—Assessment of Decontamination Practices For A Simulated Contaminant Exposure In A Civilian Population;" American Industrial Hygiene Conference; Dallas, (May 2003)

Motivated by a quest for knowledge and a desire to use that knowledge and experience to propel our nation's fire service into the future, Chief Jenkerson is a staunch supporter of employee development through education and training, and utilization of technology and innovation to continuously improve the department's level of service and assure that employees perform their work in the safest, most efficient manner.

Chief Jenkerson and his wife Michelle are the proud parents of three adult children, Danielle, Emily and Dennis II. The Jenkersons are life long city residents, currently residing in the Holly Hills neighborhood.