Although St. Louis was founded by French fur traders, and eventually settled by large numbers of Americans moving west from the former English colonies, the great wave of German immigration in the middle 19th century had a substantial impact on the cultural life and the built environment of St. Louis. Whether coming directly from Germany, or from previous settlements in the eastern United States, the Germans of St. Louis constructed their new buildings using familiar forms and construction techniques they had known in Europe. Although they also built in brick, the most distinctive forms of German house construction during this period are represented by Fachwerk and Coursed Limestone houses. 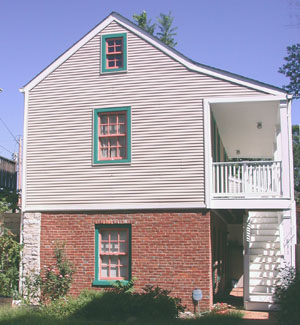 Fachwerk houses used a framework of heavy, braced timbers atop a masonry foundation. The spaces between the timbers were filled with brick nogging laid in courses. Sometimes the timbers were left exposed on the exterior of the house; most often, however, the exterior was protected from the weather by a sheathing of wood clapboards. This construction technique most likely evolved in Bavaria, where there was a shortage of wood for house construction. The use of Fachwerk lasted only a short time, and was replaced by the more easily-built American technique of light framing. Isolated examples of these buildings remain in the older parts of St. Louis, such as Soulard, Hyde Park, and Carondelet; but since from the exterior they appear to be ordinary frame houses, they often go unnoticed.

The two-story house at 811 Allen, constructed possibly about 1840, is set back from the street, and is one of the oldest houses in the Soulard neighborhood. There are two rooms on each floor, a full basement, and a two-story side gallery. Doors opening from the gallery lead into each of the four rooms. A large central chimney provided fireplaces in each room. The only stair to the second floor located at the far corner of the gallery. Originally, the house had multi-light wood windows and a wood shingle roof. The house is shown after rehabilitation.

Unlike the Fachwerk houses, the German stone (or "rock") houses are easily identifiable. These houses may be of several plan types: single-room, back-to-back, central hall), but all are built of coursed rubble limestone: irregularly-sized stone blocks laid in lines or courses. German stone masons were very adept at using the quantities of limestone available at St. Louis quarries. Often the stone was not of the first quality, yet care was taken to dress, shape and lay it in even courses. These houses are found east of Jefferson Avenue; the largest remaining concentration is in the Carondelet neighborhood.

The house at 110 Courtois Street is a German coursed limestone house. The two-story house is symmetrical, with a central door, two flanking windows on the first story, and three symmetrically placed windows on the second. The house has a gable roof, with carefully-shaped flat arches above the windows. This is one of the finer remaining examples of this building type, although its windows and door have been reduced in size.