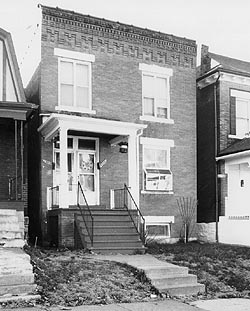 Half of a typical St. Louis two-family flat built in 1906, the Shelley house is important in African-American history and in law. It served as the home of the plaintiffs in the landmark case Shelley vs. Kraemer (1948), in which the United States Supreme Court ruled unconstitutional the enforcement of racial restrictive covenants in housing. Extending beyond racial distinction, the Shelley decision is of importance to all Americans of ethnic and minority heritage. The Shelley's no longer own the house, but it is still in private hands.