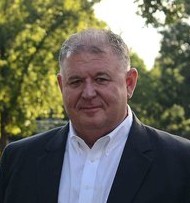 Greg Hayes has been employed by the City of St. Louis for 24 years. He has a Master’s Degree in Industrial & Organizational Psychology and a Bachelor’s Degree in Political Science. He was President of Forest ReLeaf of Missouri from 2012-15, is the current President of the Police Athletic League (PAL) and is a certified arborist with the International Society of Arboriculture. He worked in the Department of Personnel from 1994-99 and in the Forestry Division from 1999-2015 serving as Commissioner of Forestry from 2001-15. He was appointed by Mayor Francis Slay to serve as Director of Parks, Recreation and Forestry in January 2015 and was re-appointed by Mayor Lyda Krewson in April 2017. He manages a $20 million dollar budget including management of Soulard Market and Operation Brightside.