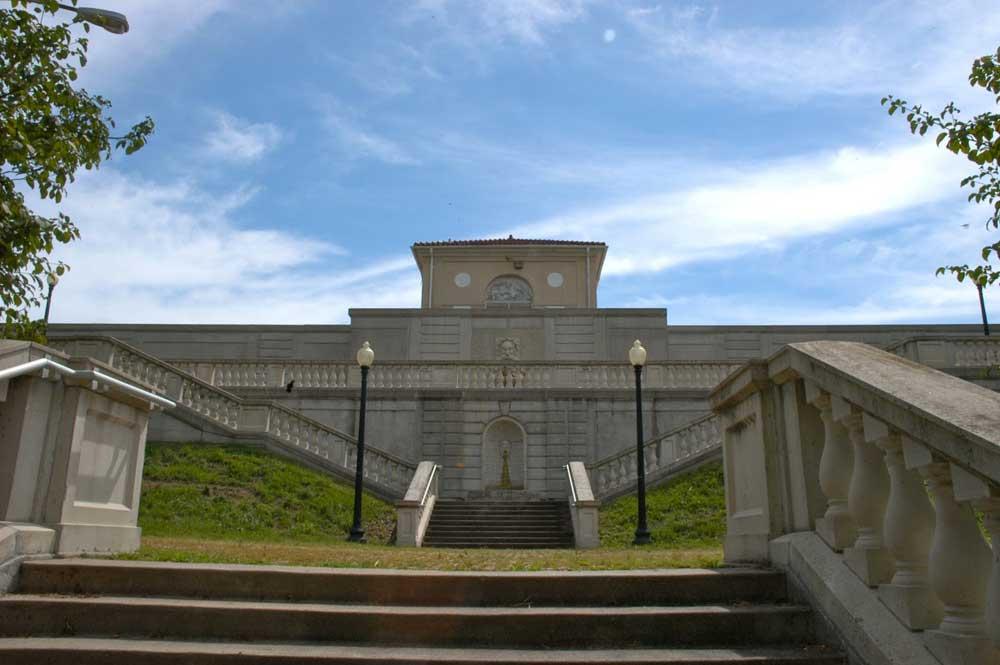 The water tower, built as superstructure for Stand Pipe No. 3 in 1899 after a Romanesque design by Harvey Ellis, is a South Saint Louis landmark. The tower quickly became a favorite spot from which to view the City, and remains so today with limited public hours for the public to tour and climb to the top. The structure consists of a stone base, with a brick shaft that rises 179 feet with a total of 198 steps.

Located at Grand and Russell Avenues on the east side of the street, the large reservoir wall was designed by Guy Study. The arrangement of steps and wall fountains is in the manner of those in the gardens of Italian villas. Two bronze tablets on either side of the steps on the west wall give all of the historic information about the reservoir.

During the 1930's, the reservoir was covered with a concrete roof upon which tennis courts were placed in use until World War II. Balustrades and two large fountain basins on either side were added the following year and the massive head by Architects Roth and Study was designed in the west retaining wall.

Public hours for touring and climbing to the top of the water tower differ from general park hours. The Water Tower is open to the public as follows:

Saturday and Full Moon viewing information is availalble at the events calendar on the Water Tower Foundation Website.

The Water Tower is available for reservations in some cases by calling 314-552-9000.

The east side of the park has a dog park available to members:

For more information about the Dog Park ONLY call 314-865-2374 ask for Richard. dogpark@watertowerfoundation.org