Overview and amenities for Aboussie Park 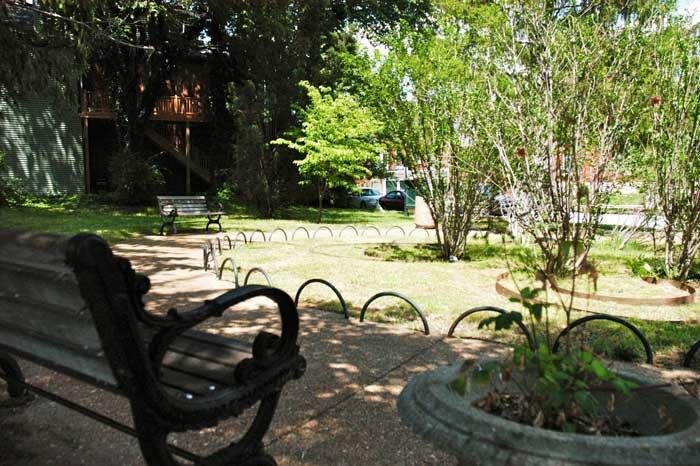 Aboussie Park was established in 1981 and is located near Sidney and 13th Street, and just east of the chain link fence on the I-55 easement. The stretch of Interstate that Aboussie Park lines, is probably most recognizable by the shuttered 'Hi-Way Bar' visible just south of the Sidney overpass.

Recognized as the smallest of all city parks, covering a mere 0.4 acre, this park is surrounded by well-kept St. Louis brick homes with manicured front lawns and gardens.

This park does provide an area to walk the dog, a place to sit/rest and a small set of trees and shrubs to attract birds and other small wildlife. One thing you can't help but notice while walking in the park was the smells of coniferous trees and perennial flowers meshing with the smells of barley from the ABI brewery...another great organic scent...one truly unique to this part of town.

The park has several nice benches and logically placed trash cans. There are also bike racks to secure your bike.

There are actually two monuments commemorating members of the Aboussie family, the first a sign that speaks to the life of Martie "Murph" Aboussie and the second, a statuette of St. Francis of Assisi in honor of Martie J. (Jay) Aboussie, Jr. who died at the young age of 23 in 2006.

The sign commemorating Martie "Murph" Aboussie is rather vague on his actual accomplishments, rather characterizing his time as a servant of the common man and a friend to youth.

Nearby features: Stumbling distance from the AB Brewery. Could be a nice, tiny destination after a tour. Also surprisingly close to Soulard bars. The surrounding neighborhood also has some interesting old houses.

Access: This park is relatively hard to find, and there are few people who will choose to walk over the highway (or around the Brewery) to walk there. However, it’s got great access for the folks right across the street. There are some nice bike racks nearby! The #73 bus actually drops off just a few blocks away on 12th Street.