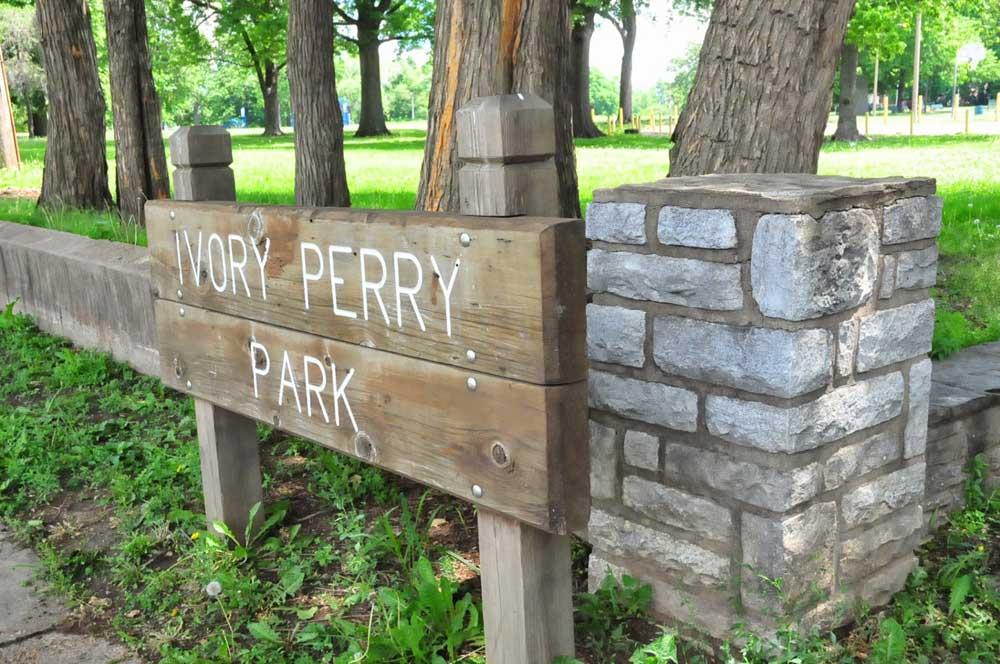 This land was the site of the old Visitation Academy and Convent formerly named Visitation Park.

In 1892, the Catholics built Visitation Academy on what is now Ivory Perry Park.

The original Visitation Convent and Academy was on Cass Avenue.

The Academy of the Visitation was incorporated in 1858 by Visitation Nuns who arrived in St. Louis from Kaskaskia following the flood of 1844. Its three story brick building was erected on a large wooded lot donated by Mrs. Anne Biddle on Cass Avenue near Twentieth Street. In a westward move in 1892, the Academy occupied a large French Renaissance style building on a tract at the southeast corner of Cabanne and Belt Avenues. This structure was designed by Barnett, Haynes, and Barnett and was occupied by the Academy until 1962 when it made another westward move to 3020 North Ballas Road in St. Louis County. The old property was sold to the City; the main building was razed and its site became Visitation Park.

In 1989 the name was changed to honor Ivory Perry, a local civil rights activist.

Ivory came to St. Louis in 1954 and was drawn into civil rights protests within a few years. When the extensive picketing for jobs at Jefferson Bank began in 1963, he became one of the most reliable activists on the picket line. It was during this time that Ivory was often in the press when he was arrested for actions such as lying down in front of cars.

Protests of the 1960s objected to the exclusion of Blacks from American life — from jobs, from voting, from being served at lunch counters. But when Ivory became an employee of the Human Development Corporation in the late 1960s, he faced a different aspect of racial injustice — Black people being crowded into substandard housing. Ivory’s experience in demonstrations served him well as he organized for tenant rights, including the rent strike of 1969.

While visiting renters in their homes, Ivory noticed recurring health problems among children. He discovered that they could be traced to lead in the paint of old homes. Previously, Ivory had been a dependable foot soldier for events that others called. But with lead, Ivory was the person who drew attention to a major problem. His work was instrumental in persuading the St. Louis Board of Aldermen to pass the city’s first legislation on lead in 1970.

Ivory Perry had broken new ground in making the link between social justice and human health issues. By the end of the decade, problems such as these would become known as “environmental racism.” Source: http://www.greens.org/s-r/41/41-06.html