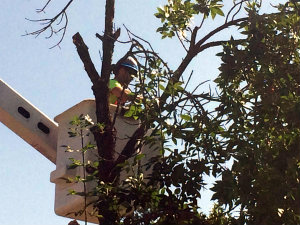 ST. LOUIS -- Beginning in the northern part of the City of St. Louis, where an Emerald Ash Borer infestation has begun, City crews and contractors will remove weak and dying Ash trees before they die and become dangerous. They will start their work on Wednesday, September 7, 2016, at in the 5200 block of

The shiny green Emerald Ash Borer is responsible for destroying hundreds of thousands of Ash trees across the country and was recently discovered in the City of St. Louis. The City's Forestry Division has been preparing for the eventual onslaught of these destructive pests, which have been moving across the country from east to west for more than a decade.

The bug Agrilus planipennis, or "EAB" for short, is an invasive wood-boring pest that kills all types of Ash trees. EAB only affects Ash and Fringe tree, a related genus, and is not a threat to any other type of tree. Unfortunately, Ash is the most common tree along St. Louis streets and is also a common landscape tree.

The Forestry Division has mapped more than 15,000 public Ash trees along City streets and parks. In June, crews began treating large, healthy Ash trees before they could become infected with the bugs. Over the course of the next five years, about 14,000 Ash trees will be removed before they the EAB can kill them. A dead Ash tree is a public safety risk, as it is more likely to break and fall, especially during storms.

Ash trees slated for removal have been tagged with bright yellow flyers. Residents can see where Ash trees are located by visiting the website Show MO Trees (http://showmotrees.mytreekeeper.com/).

Forestry Commissioner Skip Kincaid, an Board Certified Master Arborist, and contracted crews from Michael's Tree & Loader Service will begin Ash tree removals this week. Work will continue through the fall, using the street sweeping schedule as much as possible to lessen the traffic impact on neighborhoods.

"Some City streets and neighborhoods will see a dramatic reduction in the number of trees along their streets," Kincaid said. "This is the reality of invasive pests and provides even more emphasis on the need to have a diverse population of trees to reduce the dramatic impacts of invasive pests.

"We are well equipped to handle EAB and have been preparing for it since before the pest was first reported in in 2008. Our plan includes treating some trees, removing others, and above all, replanting a wide diversity of tree species."

The City is committed to replanting the trees that are lost, often in the same spot where Ash trees will be removed. Grant money, along with City funds made available to aldermen each year will be used to pay for replacement trees. The City's partner, community forestry non-profit Forest ReLeaf of Missouri, also will assist with communicating directly with neighborhoods affected by the Ash tree removal. Those trees will be replaced with a variety of 40 different native trees. Forest ReLeaf is also working closely with community leaders to encourage citizen volunteers to take part in neighborhood planting events this fall. Those wishing to be kept informed about tree planting plans may sign up at www.moreleaf.org/ashreleaf.

The City has listed its EAB Strategy online (www.stlouis-mo.gov/ash-borer/), including answers to common questions and the map of tree locations.