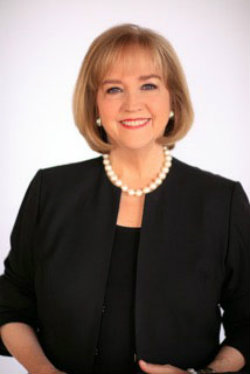 Lyda Krewson won a historical election in April to become the first woman to serve as mayor of St. Louis. Prior to the election, Krewson established herself as a leader in City government serving as 28th Ward Alderwoman beginning in 1997.

Throughout her tenure as an elected official, Krewson has worked closely with neighbors to resolve neighborhood problems, reduce crime, consider development proposals, and always to balance the interests of residents and businesses.

Krewson has unapologetically taken on the tough and controversial issues including a comprehensive smoking ban and the state's concealed carry statutes. She led the way on modernizing city government as the first alderman to support across-the-board charter reform. Krewson also played a key role in the successful effort to reduce the size of the Board of Aldermen from 28 to 14. Krewson has worked to put in place the REAL Change Program in the Central West End, a program aimed at encouraging social services to reduce the negative effects of poverty. She has also sponsored legislation that placed restrictions on scrap metal trafficking, and established limits on the use of "dark money" in municipal elections.

Recognizing that Missouri is the only state in the country without a Prescription Drug Monitoring Program (PDMP), Krewson recently worked with St. Louis County to establish a joint PDMP to address our region's growing opioid problem.

Krewson was instrumental in bringing the City of St. Louis and Forest Park Forever together in an unusual $130 million public/private partnership to secure 30 years of funding and maintenance for Forest Park. She has also invested in street improvements to make neighborhoods more accessible for walkers and bike riders, planted over 1,500 trees, sponsored the 'doggie dining' bill, and spearheaded the Sunflower+ Program.

After graduating with an education degree from Truman State University, Krewson moved to St. Louis where she obtained her accounting degree from the University of Missouri-St. Louis. Krewson is a CPA, formerly an auditor for Deloitte, and chief financial officer of PGAV, an international design and planning firm.

In 1995 Lyda's husband, Jeff Krewson, was tragically murdered in an attempted carjacking in front of their Central West End row house. With the support of family, friends, and many great neighbors, Krewson continued to raise her 2 kids there. In 1998, she married Mike Owens. Today, they enjoy neighborhood walks, gardening, and occasional hikes in the mountains. Like all parents, Lyda and Mike are so proud of their kids. Jack is a Teach for America math teacher at Normandy High School. Taylor is the teen leadership camp director for Wyman.