Systemic Change through a Governance Framework

Last week, the City of St. Louis took a monumental step forward toward criminal justice and public health reform with the formalization of its Criminal Justice Coordinating Council (CJCC). This governance structure allows state and local agencies to come together to pinpoint the gaps and needs of the whole criminal justice system and the individuals served in ways not possible before.

It was Mayor Lyda Krewson’s vision to create this framework, representing the various agencies, disciplines and levels of government so that they could formulate a unified vision and mission that can then be executed in a coordinated, cohesive and expedient manner.

And, in fact, the CJCC is the only such coalition codified by law in the state and regionally, when the City of St. Louis Board of Aldermen passed Ordinance 71012 and the Mayor signed it last summer.

The idea behind the CJCC is not to demand perfection or quick fixes. That is what got us into this complex maze we are in now – demanding silver bullets to the complicated problems of what to do about the over-reliance on the justice system to solve every social challenge, as well as the overrepresentation of minorities and the mentally ill and substance use dependent individuals in the system.

This over-reliance is costly to taxpayers and has broad reaching impacts on those long beyond release after incarcerated. Family connections weaken and employment opportunities diminish as a result of confinement, increasing the odds of recurring antisocial behavior and recidivism.

These are some of the insights I have learned about the City of St. Louis after serving more than two years as a FUSE executive fellow — first, working as an executive adviser to the Mayor, then also as the Interim Executive Director for the CJCC.

During the past two years, I worked to identify opportunities to connect data from arrests, charges, jail and prison time, probation tactics, and so on. I have also learned how decisions are made in a way that matches treatment, services and resources to the population. This data-driven strategy is key to identifying the type of services needed, especially when it comes to behavioral health.

The City must remain deeply committed to developing innovative strategies to address health disparities that exist amongst the region’s justice-involved population and be committed to doing so through a collaborative governance structure. We must all be committed to ensuring this work reduces fragmentation of services administered to our justice-involved population by increasing access to much needed services. It is not only important to cultivate treatments, services and resources that match the needs of the population served, but also to take into account what help individuals might accept.

Everything I have learned about criminal justice and public health reform has taught me the importance of long-term, planned, coordinated responses. The CJCC provides a formalized governance structure that ensures a place at the table for all relevant agencies and engenders equality in decision making by all members. A formal governance structure also ensures continuity and sustainability over time.

The City’s CJCC is now poised to adopt an Intergovernmental Information Sharing Agreement which builds trust by defining the legal boundaries of data ownership and dissemination across the different domains. Formalizing the sharing of data in a transparent manner removes the roadblocks that often occur to prevent collaboration across the domains.

The Need to Leverage Data

In order to make informed decisions, elected officials, front-line criminal justice practitioners, and public health service providers must begin with leveraging data and information, well beyond “sticky-notes” and “management by excel spreadsheets.” We see funders giving deference to initiatives where this is a primary goal.

Anne Milgram, former Attorney General for the State of New Jersey, coined her own phrase for the use of predictive analytics to create business intelligence and insight — “money balling criminal justice.” She figured if the use of data analytics and quantitative analysis in making player decisions was good enough for the Oakland A’s, it would be good enough for the criminal justice system.

Moneyball, for those who have not heard of it, is the tactic by which the Oakland A's used smart data and statistics to figure out how to pick players. They went from a system based on scouts who would go out and watch players and use their instinct and experience to pick the players, to one that uses data and rigorous statistical analysis to figure out how to pick the best players.

In her TED Talk, Why Smart Statistics are the Key to Fighting Crime, Milgram begins by discussing her past role as New Jersey’s attorney general and her attempt to understand “who we were arresting, who we were charging, and who we were putting in jail.” She also wanted to determine, “if we were making decisions in a way that made us safer.”

What she quickly found was agencies gather a lot of information, but the data was not combined together to allow for an unified vision to answer her questions—and the most common method of compiling information from these different system sources was by sifting through piles of case files with a pen and legal pad in hand. Further, it dawned on her after a day in the Camden Police Department—where they were working desperately to reduce a very high crime rate—their crime-tracking system was based not on data but on a board plastered with a collection of sticky notes: “We weren’t using data-driven policing. We were essentially trying to fight crime with yellow Post-it notes.”

Milgram came to understand important decisions were being made based on an informal array of gut instincts and sticky notes—with no use of analytics to back them up. It made her start thinking differently about how those decisions should be made. She describes how her change in roles from assistant district attorney to federal prosecutor provided her with a more comprehensive view of the legal system: “What I learned very quickly is that we weren’t doing a good job. So, I wanted to do things differently. I wanted to introduce data and analytics and rigorous statistical analysis into our work. In short, I wanted to moneyball criminal justice.”

Milgram’s approach to criminal justice was transformational. The next transformational move is to apply this wisdom to local jurisdictions to help them develop the proper governance frameworks to share information across the domains.

We have failed to recognize the criminal justice system is overwhelmingly administered at the local level, and yet, the focus to implement governance to share information across the different domains has largely been on states. Additionally, the idea of data-driven decision-making has not yet expanded to the whole of the criminal justice system. We seem to only focus on law enforcement and jails.

But it can be expanded, and it should. And, in this respect, processing from arrest through sentencing is particularly important. At this stage, police, prosecutors, defenders, and courts make key choices about how to deal with justice-involved individuals—choices that, taken together, have an enormous impact on crime. Yet, most jurisdictions do not have the means to analyze the data necessary to know whether these decisions are being made in a way that accomplishes the most important goals of the criminal justice system: increased public safety, decreased recidivism, reduced cost, and the fair, efficient administration of justice.

Like Anne, when I changed roles from state government to local government, I too gained a more comprehensive view of the criminal justice system. The system is largely administered at the local level, but comprised of federal, state, local and/or tribal agencies. It is because of these differing and sometimes competing interests that a separate, legal governing body, such as a CJCC is necessary. Absent this collaborative framework, these individual entities struggle to share data and information in a consistent manner.

Constituents should and do demand productive dialogue from all of us. It is imperative that everyone works in the same direction to achieve meaningful and sustainable justice and public health reform that ensures public safety, offender accountability and healthy communities. Community-based programs have the potential to offer important and effective alternatives that reduce crime and allow policymakers to rely less on incarceration, while still prioritizing community safety. Additional social services, including those focused on mental health, substance abuse, life skills, housing, and employment services, allow individuals to regain their productivity and effectively contribute to their communities, families and economies.

The success of these local strategies requires planning and coordination from everyone with a focus on systemic change through a governance framework. 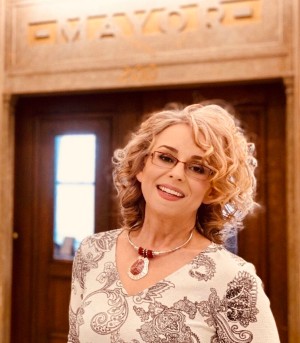 Ms. Allen serves as the Executive Advisor to the Mayor and Interim Executive Director for the City of St. Louis’ Criminal Justice Coordinating Council. She has worked for local and state government agencies in a variety of capacities for nearly 25 years addressing criminal justice and public health reform. Ms. Allen is a change agent helping others to see and embrace a shared vision.