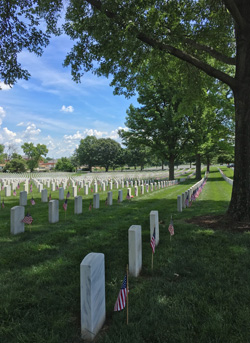 The tradition Memorial Day as we know it started after the United States Civil War with the decorating of soldiers graves with flowers. In the northern regions of the United States flowers were generally in bloom by the end of the month of May, which were then placed on the graves of those who served in the military.

St. Louis families are no different and often visit cemeteries in the springtime to put flowers on their relatives’ graves. As a special distinction on Memorial Day it is also customary to decorate the graves of those who served in the military with a United States flag.

So this weekend when we are all enjoying the kick off of the summer season please remember that celebrating Memorial Day has its roots in honoring those who served our country.