This citizens board will be responsible for independently receiving and reviewing complaints about the St. Louis Metropolitan Police Department 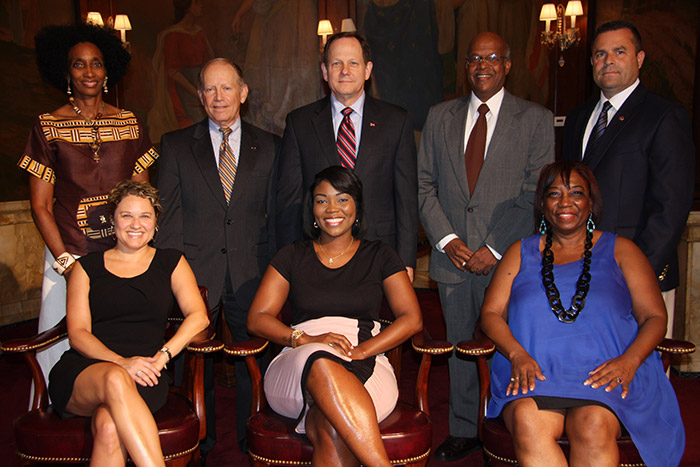 ST. LOUIS -- Mayor Francis Slay introduced seven people to serve on the City's newly-established Civilian Oversight Board. This citizens board will be responsible for independently receiving and reviewing complaints about the St. Louis Metropolitan Police Department.

"I want to thank the citizens of the City of St. Louis who are willing to serve on this board to help enhance trust between police officers and the community," Mayor Slay said. "These individuals have pledged to be fair and objective and to make decisions based only upon the facts and evidence before them. They must be fair to citizens and to police and must protect their rights, ensuring that civilians have a role in our police department, and increasing transparency."

Over the past few weeks, Mayor Slay and his staff reviewed the applications submitted by nearly 50 candidates. The Mayor submitted to the Board of Aldermen for confirmation a diverse and highly qualified slate of nominees representing the spirit and diversity of the City of St. Louis. They are:

Ciera is a 27-year-old African-American woman currently working at US Bank, a position she's held for the last 10 months. She formerly interned at the St. Louis American. Ciera earned her B.A. in Communications from the University of Missouri-St. Louis in 2013. She has served as a past member of the Urban League, a past Program Coordinator for the North Newstead Association, and a current facilitator of the Neighborhood Ownership Model for the North Pointe, Walnut Park East, and Walnut Park West Neighborhoods. Ciera also received the Neighborhood Star, an award from police and the Circuit Attorneys Office, for acting as an intermediary between police and neighborhood residents who were afraid to speak to officers. Alderman Carter endorsed this candidate.

Jane is a 64-year-old African-American woman, who is a self-employed business owner of “Human Resources Select Services,” serving as the president and CEO since 1999. She is also a certified Equal Employment Opportunity Investigator, examining cases of alleged discrimination based upon race, sex, disability, national origin, and religion, as well as cases of alleged harassment. She earned a B.A. in Elementary Education from Harris Teacher’s College, an M.S. in Counseling Education from Southern Illinois University Edwardsville, as well as an M.S. in Public Administration from Webster University. Jane is a part of a multitude of organizations, past and present, including founding Teen Leaders & Communicators and the Grand Center Toastmaster Chapter, as well as membership in the Coalition of 100 Black Women, Association for Training and Development, NAACP, NOBLE, Top Ladies of Distinction, Human Resources Management Association, and the St. Louis Minority Business Corp.

DeBorah is a 59-year-old African-American woman, who has worked for Better Family Life, Inc. since 1991, currently serving as an Executive Director of the Cultural, Educational and Business Center. She earned a B.A. in Anthropology from Grinnell College, and an M.S. in Public Administration/Policy Analysis from Southern Illinois University Edwardsville. In 1985, DeBorah founded Black Dance USA, a national event focused on educating about Afro/African American culture through the power of dance. She has also worked as a Program Administrator for the Missouri Touring, managed Multi-Discipline Programs for the Missouri Arts Council, and served as an executive consultant for RiverFaces. DeBorah is a resident of the 26th ward, but Alderman Kennedy endorsed this candidate.

Lawrence is a 68-year-old African-American man, who is currently retired. He earned a B.A. from St. Olaf College, and a J.D. from Boston College Law. Lawrence is a retired hearing officer at the Illinois Department of Human Services. In 2007, he and his family moved to the City of St. Louis from Springfield, Ill, where Lawrence chaired the Human Relations Task Force. Lawrence is past president and current board member of the Shaw Neighborhood Improvement Association and was instrumental in leading and communicating with his neighborhood during civil unrest. Alderman Conway endorsed this candidate.

Brad Arteaga is a 49-year-old Caucasian man, who is the owner of “Arteaga Photos Ltd,” which he has operated in the City since 1984. He is the past presidents of both the Southtown Business Association and the St. Louis Hill Neighborhood Association. He currently serves as a board member of the St. Louis Second District Police Business Association. Brad grew up in the Baden neighborhood before moving to St. Louis Hills. Alderman Baringer endorsed this candidate.

Heather is a 39-year-old Hispanic woman, who has been a defense attorney for Fredman & Fredman P.C. since 2000. She earned her B.A. in Spanish and Criminology from the University of Missouri-St. Louis, and a law degree from Saint Louis University. Heather is a member of the Bar Association of Metropolitan St. Louis, has been featured in "CLOUT: Influential Pol, Pals, and Pundits," and is a member of Join Hands and Big Brothers/Big Sisters of Eastern Missouri. Aldermen Green, Spencer, and Cohn endorsed this candidate.

Steve is a 67-year-old Caucasian man, who is a current partner at Dentons US LLP. He is a former JAG officer, with 30 years commissioned service in the Air Force and Army, retiring from active reserves in 2000 with the rank of colonel. He completed a Fellowship in Forensic Medicine at the Armed Forces Institute of Pathology, Walter Reed Medical Center, earned an M.S. in Forensic Sciences from George Washington University, and his law degree from Harvard. Steve is currently a member of the institutional review board for Washington University School of Medicine, as well as co-chair of the Mediation Committee of the International Institute for Conflict Prevention & Resolution. Alderwoman Krewson endorsed this candidate.

The timeline, as outlined in Board Bill 208CS for implementing the full board, is as follows:

Mayor Slay signs Board Bill 208CS into law, establishing a Civilian Oversight Board for the St. Louis Metropolitan Police Department.

Clerk of Board of Aldermen delivers names of qualified individuals recommended by Aldermen to Mayor Slay (Ordinance, Section 3, subsection 5.A).