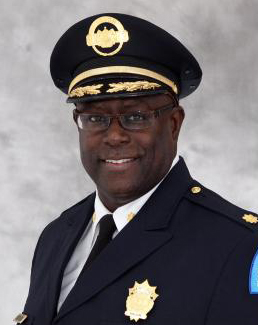 Hayden is a 30-year veteran of the St. Louis Metropolitan Police Department. During that span, he has risen through the department, earning the rank of lieutenant in 1995, captain in 2006, and major in 2015. His most recent position was commander of the Police Department’s North Patrol Division. Between 2006 and 2013, he served as commander of the Internal Affairs Division.

“John Hayden has served St. Louis with honor and distinction for 30 years,” Mayor Krewson said. “He has a great track record building trust in the communities in which he’s served. At this very critical time in our City, John will continue that exemplary service as our police chief.”

“John Hayden and his contributions to the St. Louis Police Department and to the community are respected and held in high esteem by a broad cross-section of the St. Louis community, including his peers in the law enforcement community,” Director of Public Safety Jimmie Edwards said. “He treats all people, whether law enforcement or the accused, with respect. I believe that his informed concern for our City will be a great asset in closing the trust gap between the police and citizens.”

“I know that our Police Department must change from within in order to earn the support of our citizens,” Edwards added.

During the interview process, Hayden said he is committed to community policing. His vision is of a Police Department that is accountable to the people of St. Louis, and a department that views citizens as partners working hand-in-hand with officers to combat crime, he said.

“I know how our agency functions from the executive level. I know the importance of ethical decision-making and maintaining the highest level of integrity from the top down,” Hayden said. “Our agency needs to make certain that we are providing culturally-sensitive officers with the training and tactics to ensure their safety as well as the safety of the citizens in our community.”

The lifelong St. Louis resident said his crime reduction strategy will be a holistic one, incorporating enforcement, community outreach, analysis and redistribution of resources, a more in-depth analysis of calls for service and crime trends, expanding the use of technology, early intervention and prevention, and more training for officers.

“Addressing crime in the City of St. Louis will require a police commissioner who is trusted by our citizens,” Hayden said. “I have earned their trust by being present and making myself available, by setting up a mobile office on the streets in our most challenged neighborhoods, by having outdoor roll calls in struggling neighborhoods, by attending  community meetings and seeking feedback, but most importantly by walking the streets and talking to our citizens face-to-face.”

In appointing Hayden as police commissioner, Krewson and Edwards thanked the more than 40 people who applied for the position, including the final six candidates who underwent rigorous testing and participated in a public town hall.

“Larry O’Toole stepped up and took on that role because of his commitment to the department and the people of St. Louis,” Krewson said. “We appreciate all he’s done for this City.”

John Hayden has been with the the St. Louis Metropolitan Police Department for 30 years.

1987 to 1989 - Police Officer, District Four - area patrol of neighborhoods and documentation of criminal activity and other incidents.