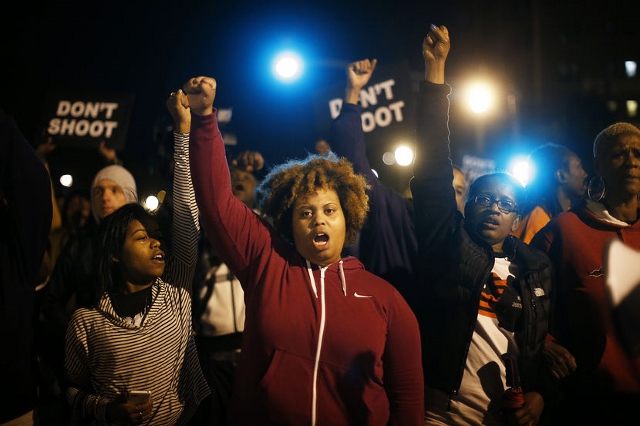 This month marks the 50th anniversary of the Selma to Montgomery marches. Three marches that occurred between March 7—March 25, 1965 that were a part of the Selma Voting Rights Movement, which would eventually lead to the passage of the Voting Rights Act.

One of the organizers of the first march was Amelia Boynton Robinson. She is now 103-years-old, but that didn't stop her from marking the poignant anniversary. From her wheelchair, Robinson held President Obama's hand as they marched on the 50th anniversary of Bloody Sunday. She played a key role in organizing the march and even invited Dr. Martin Luther King, Jr. to Selma back in 1965.

Local women including former district assistant to the Honorable Bill Clay, Sr., Pearlie Evans, also marched from Selma 50 years ago. Evans has admittedly been an activist since the tender age of nine. In 1965, she was one of many who marched from Montgomery to the capital. Locked arm-in-arm, Evans says she was "one of the anchors of the group who mistakenly stepped onto the sidewalk and was hit by an officer's bayonet." But did that stop her? "No," she says she "just kept on going."

Evans, along with retired Civil Rights attorney Frankie Freeman have devoted their lives to taking a stand and bringing about a change in policy, and a change in the lives of others. Hedy Epstein is a local woman and Holocaust survivor, who was arrested while protesting during the Ferguson unrest.

There are many women who'll go down in history with being pioneers in the Civil Rights Movement. Nowadays, women still march and protest the injustices that plague our communities. "Courage will not skip this generation," said Roslyn M. Brock, Board Chairman of the NAACP. That statement lit up social media last August and was imprinted on many T-shirts in the weeks and months that followed.

In the February 25th editorial in The St. Louis American, Ferguson protester Sana Cole penned Why We Still Protest, in which she says she "...joined the fight to help pave the way for a better America for my sons and generations to come." Cole joins other women who are active on social media (Facebook and Twitter) in helping to spread the message. She also launched a Go Fund Me campaign to help raise money for Ferguson protesters.

In the months that followed the shooting death of Michael Brown, men and women, black and white, young and old from across the U.S. came together and chanted "hands up, don't shoot!" These protesters also chanted "I can't breathe," the last words spoken by 43-year-old Staten Island, N.Y., father of six, Eric Garner. It was later ruled that New York City police officer, Daniel Panteleo, would face no consequences in Garner's death. After this, Garner's 24-year-old daughter Erica Garner, also got involved in the movement, staging several "die ins" in Staten Island.

Missouri State Senator Jamilah Nasheedwas also on the front lines during the unrest in Ferguson, so was Senator Maria Chappelle-Nadal and Patricia Bynes, Ferguson's only African-American council member. And more recently, City Treasurer Tishaura Jones testified before the U.S. Commission on Civil Rights about the current injustices in St. Louis.

There are many other women who were out there, protesting and calling for justice in the months following Ferguson. Hundreds of photos show women holding hands, carrying "Black Lives Matter" signs, and participating in "die ins" that were held across the country. It is through the efforts of these women, who are willing to fight for what's right that will stimulate change. And so the movement continues.