President of the Board of Aldermen 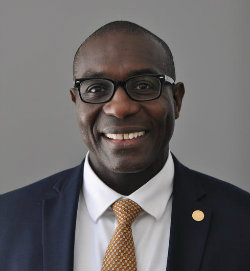 Lewis E. Reed began his public service career working for the City of St. Louis as the 6th Ward Alderman. As Alderman, Reed drafted and passed the legislation to revitalize the Lafayette Square neighborhood and worked with the neighborhood to make the redevelopment decisions.

By adopting a real vision for the 6th Ward, Reed sponsored legislation and worked to create development plans that ultimately resulted in over $1.7 billion of new development to the City of St. Louis and added hundreds of new housing units throughout the 6th Ward and contributed to the rebirth of Washington Avenue, which created the numerous loft living spaces available today.

He has sponsored a proclamation for every Pridefest for the past ten years and is a proud partner in the LGBTQ community. He also established the first dog park in the City of St. Louis

He's fought for police reform and sponsored a bill that passed unanimously that established a use of force policy for SLMPD. He also successfully brought body cameras to our officers for their safety and to improve community relations.

He also brought the online neighborhood community platform, Nextdoor, to the City of St. Louis to help engage the community and prevent crime. He has created a $1 million recurring youth crime prevention fund, and he sponsored a Gun by Gun buy-back program, which allowed for weapons to be sold back to the City to be destroyed by the police. In one day, the program removed 7,500 guns off the street.

He was the first to bring transparency to the Board of Aldermen requiring all meetings to be recorded and streamed live online. He also passed the first cyberbullying law in the City of St. Louis.

President Reed has been working hard to create funds for seniors. By sponsoring Prop S, and after voter approval, seniors are able to live independently for as long as possible with assistance from these funds.

In 2018, President Reed stood up for the “Dreamers” and sponsored legislation which recognized and took a stand against President Trump’s decision to end the Deferred Action for Childhood Arrivals. The legislation encouraged Congress to pass a legislative solution to protect those who are affected by the President’s decision to terminate the program.

President Reed has been a champion for our environment. In 2017, President Reed joined in support of the Paris Climate Agreement and he sponsored legislation to commit the City to 100 percent clean energy in the form of wind and solar and energy efficiency measures within the electricity sector by 2035. Since then, the City has taken steps to make equitable, cost-effective changes for our environment and residents.

Last year, President Reed launched a partnership with Sprint and the Sprint 1Million Program to address the “Homework Gap” for students within our public school system. The program allowed high school students who do not have reliable Internet access at home reach their full potential, by giving them mobile devices and free high-speed Internet access. More than 1,500 students were able to complete their homework at home and learn during the summer months. President Reed also played a key role in obtaining accreditation for the St. Louis Public Schools.

Before entering public service, Reed had a successful career in the private sector. He was the Director of Networks for the Edison Brothers Stores’ worldwide operations. He also served as the Manager of Data Networks for SSM Health Businesses. He attended Southern Illinois University on a wrestling scholarship where he majored in Mathematics and Computer Science.

President Reed lives in the Compton Heights neighborhood with his wife of over 20 years. He has two sons and two daughters. He recently welcomed his new grandson.