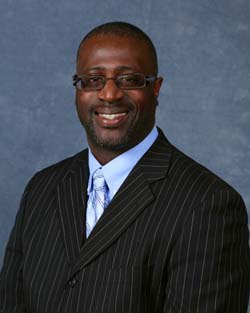 Jeffrey Boyd was born on January 13, 1964 in St. Louis, MO. He attended and graduated from St. Louis Public Schools District in 1982. Jeffrey has earned a Bachelor’s Degree from Columbia College and his Masters of Business Administration from Fontbonne University in 1999. He has taught Budgeting and Community Development courses as an adjunct professor at Harris Stowe University. Jeffrey is also a graduate of Leadership St. Louis sponsored by FOUCS St. Louis (Class 2002) as well as Dismantling Racism Institute sponsored by the National Conference for Community and Justice (Class of 1995).

Jeffrey joined the U.S. Army during his senior year in high school. He then shipped out to basic training as a private on August 3, 1982. He served 8 honorable years on active duty before returning to St. Louis when he married his wife Patrice. As he looked for ways to invest in real-estate and give back to his community, he bought property in the Hamilton Heights Neighborhood in the City of St. Louis in which he currently lives This was the beginning of his over 19 years experience in neighborhood development. In 2003, Jeffrey campaigned and won the position of Alderman for the 22nd Ward.

In 2005 Jeffrey retired from the U.S. Army Reserve as a Master Sergeant accumulating a total of 23 years of military service. His leadership has been responsible for hundreds of soldiers being trained as future leaders. Jeffrey’s commitment to community service goes beyond being a soldier and leader in his community. It goes beyond his unselfish service as Alderman advocating for neighborhood stabilization and economic development. He has served as Program Manager as well as Executive Director with various not-for-profit organizations.

Jeffrey's dedication to community service has been demonstrated by his leadership on the Catholic Campaign for Human Development for over 3 years, Facilitator for the United Way - Management Assistance Center for 3 years, and as staff with the National Conference for Community and Justice. He is married to Patrice and has three children, Jeffery Jr, Brittany, and Kayla. Jeffrey is a member of Friendly Temple Missionary Baptist Church.