On June 18, 1920, Major Albert Bond Lambert and the Missouri Aeronautical Society leased 170 acres of farmland in St. Louis County to serve as an airfield for St. Louis. Major Lambert paid the rent and had the site cleared, graded and drained, and a hangar built at his own expense. He then offered free use of the field to anyone wishing to use it.

The city of St. Louis bought the property in 1928 becoming one of the first municipal-owned airports in the country. During the next two decades, more than $17 million were invested in airport improvements and expansion of runways to help handle military requirements. Major Lambert continued spearheading these efforts until his death in 1946.

In 1956, Minoru Yamasaki's iconic arched terminal opened, becoming the forerunner of many modern airline terminals. Its modular design provided for later expansion and in 1959 Lambert became one of the first U.S. airports with jet airline service. Today, St. Louis Lambert International Airport is one of the most historic airports in the U.S. serving more than 16 million passengers a year.

“With the oldest municipal airport in the country, the City of St. Louis has always been a transformative and resilient leader in aviation,” said Mayor Lyda Krewson, City of St. Louis. “Over the last 100 years, we’ve been home to international airlines and aerospace manufacturers that revolutionized global air travel, and our iconic airport design has inspired several other airport terminals around the world. Today, our airport is once again leading the way during unprecedented times as a critical asset to our region’s economic growth and development. Congratulations to St. Louis Lambert International Airport, and all of its hardworking, dedicated staff, on reaching this historic and significant milestone.”

“STL’s 100-year history is rich with growth and success, but it is nothing without the thousands of dedicated employees – past and present – who have powered progress at the city’s airport,” said Rhonda Hamm-Niebruegge, Airport Director. “We’re proud of Major Lambert’s legacy, we’re thankful for the opportunity he gave us to make a difference in our region, and we are driven by the opportunity we have to help shape our future.”

To celebrate this monumental milestone, the airport marked the occasion with the unveiling of a rendering of a glass artwork honoring Major Lambert by artist Martin Donlin. The majority of Donlin’s projects work on a variety of levels, with bold images for impact, yet containing small intricate details to be seen close up. 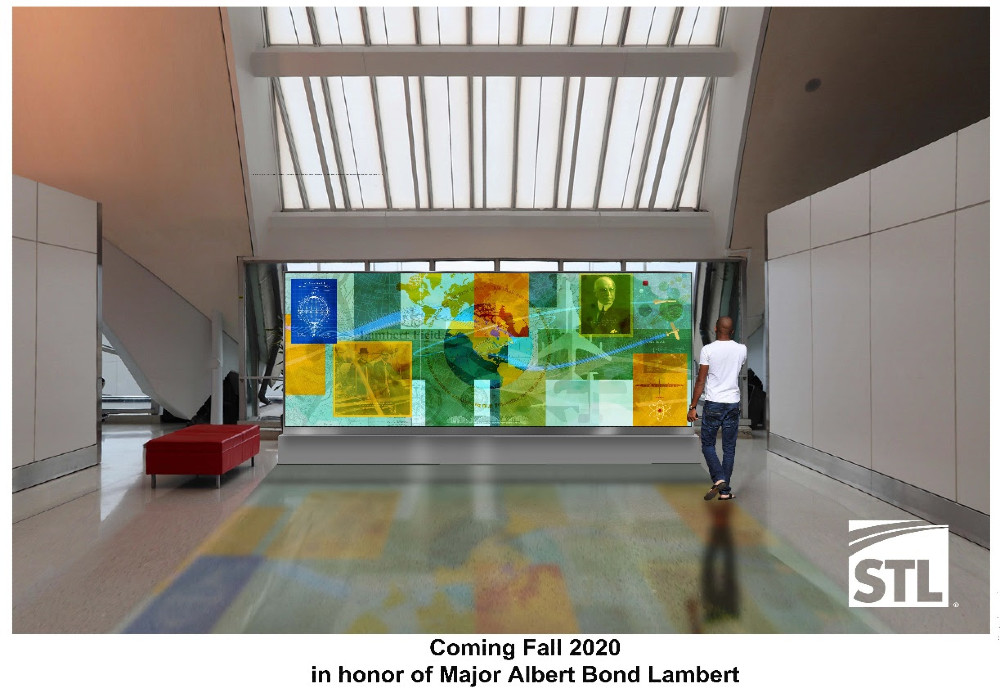 The artwork is inspired by the life and legacy of Major Lambert from his early enthusiasm and support for aeronauts to actually becoming a balloon and air pilot himself. The design contains a variety of images including a diagram of a hot air balloon and aircraft from throughout aviation history that have significant ties to the St. Louis region. It includes two images of Lambert - one as a young man at the controls of an early Wright Brothers plane with Orville Wright. The central image shows a globe with the trajectory of a flight taking off from St Louis circling the globe and heading for the stars. The artwork will be installed in the Fall of 2020. The glass artwork was paid for with private funds through the airport’s Art of Travel program.

Other special activities included live music for a few guests during special one-on-one, socially-distanced, 10-minute performances. The Kingsbury Ensemble, founded in 1999 and based in St. Louis, is one of the Midwest's premier early music ensembles. Their musicians have played worldwide and their performances range from solo recitals to larger productions including song, dance, and theater.