The history of the St. Louis City Hall and the role it has played in local government. 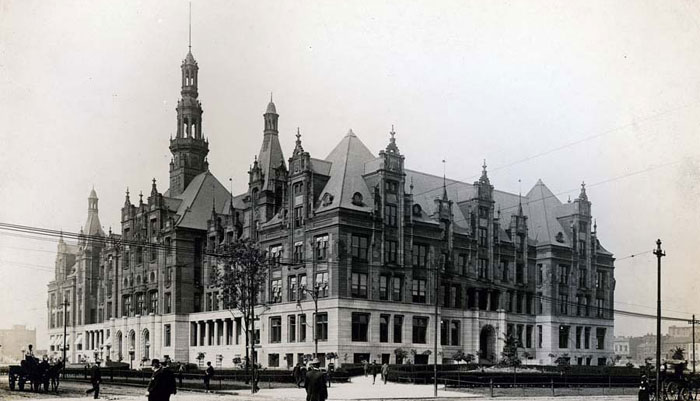 The current City Hall, having housed city government since 1898, is a landmark by appearance, reputation and city designation. Located on the southwest corner of the intersection of Tucker Boulevard and Market St., the front of City Hall faces Tucker although the official address is 1200 Market Street.

City Hall sits on part of a six-acre site, now known as Washington Square, that originally was part of the Chouteau Hill Pond tract. The location of the current City Hall was acquired by the City for $25,000 from Thomas Smith on Dec. 1, 1840. Fifty years would pass before construction began on what is now the current City Hall. 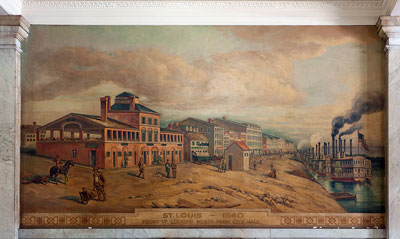 In the first years of the City government, the town fathers met in private homes, banks, saloons, anywhere they could find a meeting place. In 1827, the Council voted to spend $13,000 to build a combination City Hall/market on the Place D'Armes; located on the riverfront on the south side of Market Street and Walnut. The building was saved from the 1849 fire that destroyed much of downtown. However, the building was razed the following year. Although the original building no longer exists, a representation can be seen in the mural "Front Street in 1840" inside the main entrance (Tucker Blvd.) of the present City Hall.

In 1851 another City Hall Building was constructed using funds from a bond issue. Fire struck again in 1856, this time claiming the structure. Left without a building, City officials rented space in the Old Courthouse, leasing one of the wings for about $1000 a year.

The City Council discussed building a third City Hall in 1868 but decided in 1872 to erect a "temporary" building known as "the barn." The first building to be used solely as City Hall was built on the block bounded by 11th, 12th, Market and Chestnut St. This temporary, three story building cost $70,000. "The Barn" was used as City Hall until 1898 and stood until it was finally razed in 1921.

With municipal functions outgrowing the old "City Barn," efforts to build, what would become the current City Hall, got underway in May 1888 when the City Hall Commission was formed. On April 4, 1889, an ordinance was passed to authorize the Commission to advertise for bids for the building. The original cost was not to exceed one million dollars. The commission chose the design of George Richard Mann, of the firm Eckel & Mann of St. Joseph, from the 37 national entries. His design was titled "St. Louis 1892," obviously expecting it to be completed by 1892. A French-style plan, inspired by the Hotel de Ville or City Hall of Paris, with ornamental dormer windows and former towers, it also recalled architectural elements of the Chateau de Chambord on the Loire River in France. 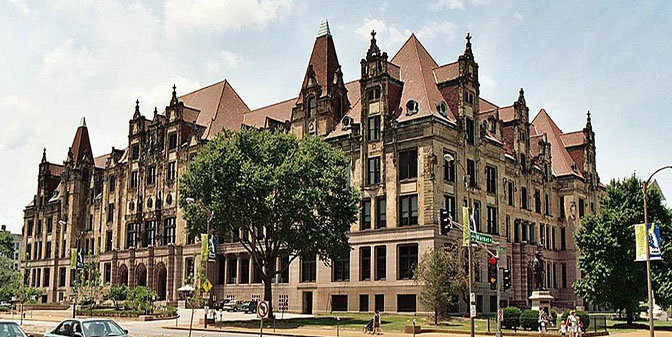 No bond issue was passed to finance construction of the new City Hall, explaining the 14 years required to finish the building. Funds came from general revenue and the sale of city property. Every year or two, the Council, would authorize an average of $110, 000 to continue construction. An ordinance was passed on Sept, 10, 1893 to limit the total cost at two million dollars. Though the building was not completed, it was finally occupied on April 11, 1898 when Mayor Henry Ziegenhein headed a ceremonial parade of city officials from the old building to their offices in the new City Hall.

At the time the current City Hall was designed, St. Louis had a bicameral form of government similar to the Missouri Legislature. The building originally had chambers and meeting rooms for the House of Delegates and the City Council. The City Charter, adopted in 1914, eliminated the Council and changed the House of Delegates to the Board of Aldermen.

The room that once housed the Council is now the Board of Public Service chamber with the Board of Aldermen occupying the original House of Delegates chamber and committee rooms.

In 1904, the final portions of the building were completed, the Rotunda, the Tucker Boulevard vestibule and the grand staircase, using the design by the St. Louis architectural firm of Weber & Groves. The building was officially completed on Nov. 5, 1904 when Mayor Rolla Wells held an open house for the residents of St. Louis. The final cost of the building was $1,787,159.16

The exterior of City Hall was never quite finished. All sides of the building have ornamental dormers called belvederes, each having bare spaces of limestone. These were meant to have carved decorations, yet remained untouched probably due to lack of funds.

Despite its incomplete state, City Hall was praised for its "splendid architectural composition," and called "an impressive period piece of craftsmanship."

A poorly executed acid cleaning and years of exposure to coal smoke has left the original pink and orange exterior tarnished.  Former Mayor Clarence Harmon commissioned a study of the building's structural and cosmetic problems in 1998.